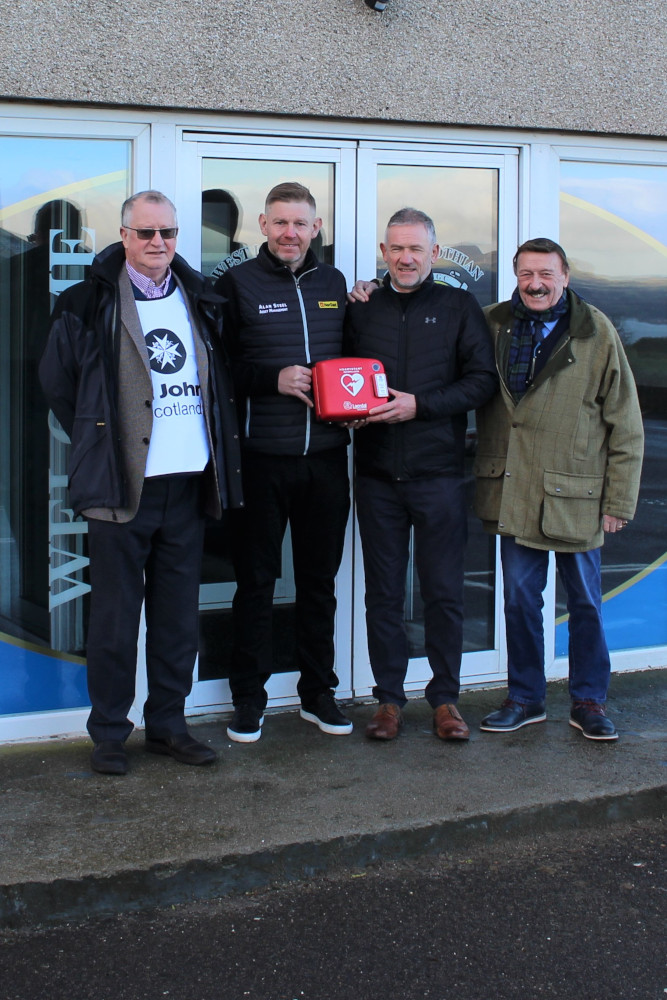 Scottish golf star Stephen Gallacher has lent his support to a cause close to his heart by unveiling a defibrillator at The West Lothian Golf Club.

The device was originally donated to the club by St John Scotland in a partnership with Scottish Golf in 2015 which saw clubs across the country gifted life-saving equipment. We have now funded the purchase of an outside cabinet so the defibrillator can be accessed 24/7 if needed in an emergency.

In Scotland, more than 60 people have a cardiac arrest each week. It can affect people of all ages and levels of fitness, and often happens without prior warning. Acting quickly by starting CPR, and using a defibrillator if one is available, can make the difference between life and death.

Two time Dubai Desert Classic winner and former Ryder Cup player Stephen, who is originally from West Lothian, knows from personal experience how important defibrillators are. His uncle, fellow professional golfer Bernard Gallacher, had his life saved by one when he suffered a cardiac arrest in 2013.

Stephen said: “He was about to stand up and make a speech when he collapsed suddenly. Luckily the staff knew what to do and had a defibrillator nearby which they used to resuscitate him. He wouldn’t be here now if it wasn’t for that defibrillator. I also know two people who’ve had their lives saved by the defibrillator at Bathgate Golf Club.”

He continued: “I think the work St John Scotland are doing to raise awareness is great, and I’m pleased to hear they are planning to work with more clubs in West Lothian to make sure the staff and members are trained up in CPR and know how to use the defibrillators.”

Captain of The West Lothian Golf Club, Pete Cowen, said: “We were very grateful to receive the defibrillator from St John Scotland a couple of years ago, and now they have helped further by donating the cabinet so it can be accessed at any time of day or night. We hope that it never needs to be used, but it’s reassuring for our members and also people in the local community to know that it’s there.”

Chair of St John Scotland’s West Lothian committee, Keith Stirling, said: “We’re really pleased that Stephen has lent his support to our work in West Lothian to get more defibrillators out in the community. These devices are really easy to use – you just turn it on and it reads aloud instructions to you – so anybody within reach has the power to help save a life. We’ll be offering training to the staff and members of the club in the near future so that more people know what to do in an emergency.”