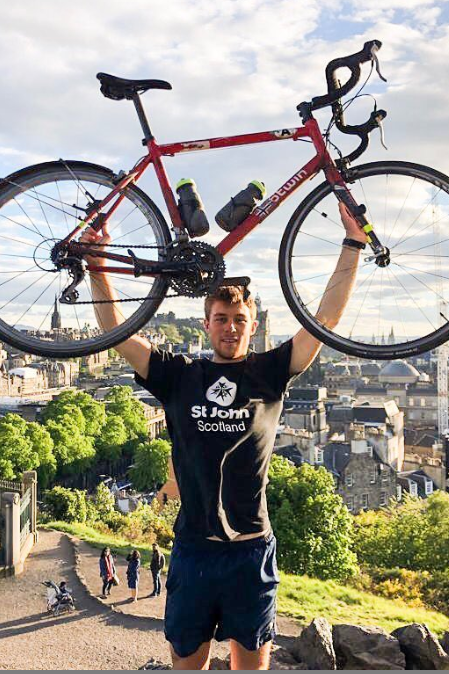 An inspirational student has arrived back home in Edinburgh after completing a mammoth fundraising cycle around the coast of Great Britain to raise money for St John Scotland. 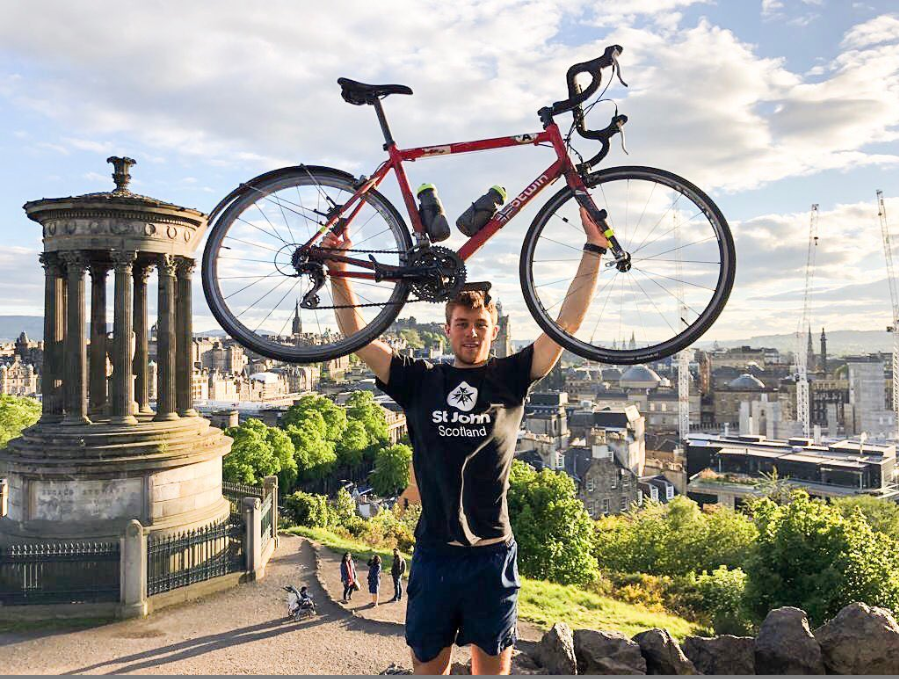 21-year-old Angus Hawkins’ epic journey saw him clock up a staggering 2,700 miles in just 20 days – the same as cycling from Land’s End to John O’Groats three times over.

Angus was inspired to undertake his adventure to raise money after benefiting from our Mountain Safety training.

Setting off from Edinburgh on 3 May, Angus’ route saw him travel southeast along the coast to England, round towards Land’s End and north again hugging the coast of Wales. By day 13 he had crossed back over the border at Gretna Green – just 65 miles from Edinburgh as the crow flies, but still a further 1,000 miles to go up the west coast via Skye, John O’Groats and back to the capital.

Speaking as he recovered from his titanic effort, Angus said: “It was an incredible trip, and I’m not sure it’s quite sunk in yet what I’ve done. I knew it was an ambitious goal when I set out, and there were some touch and go moments when bits of my bike broke one by one on the way round! I’m really pleased I managed to do it and very thankful for the support I received along the way.”

Of the experience itself, he said: “I took in as much as I could, but cycling long distances every day made it difficult to fully appreciate the landscapes I was traveling through. However some key moments stood out – when I reached Land’s End, and also at John O’Groats, the enormity of what I was doing really hit me. Cycling in to Glen Coe was amazing as well, being back on home soil where I was familiar with the roads.”

Thanks to donations from family and friends, Angus has so far managed to raise more than £1,000 for St John Scotland.

Chief Executive of the charity, Angus Loudon, said: “We’re very impressed that Angus has taken on this ambitious challenge to raise money for us. There are not many people who can say they have cycled round the coast of Great Britain, and to do so in only 20 days is an amazing achievement! The money Angus has raised also will have a big impact. Throughout the country, our volunteers are working to save lives from cardiac arrest, by training people in CPR and helping to install defibrillators. Thanks to the support of everyone who donated to Angus’ fundraising page, we’ll be able to reach into even more communities to help save lives.”

It’s not too late to support Angus Hawkins’ fundraising drive – donations can be made to his JustGiving page at: https://www.justgiving.com/fundraising/angus-hawkins2